Last year at the local ploughing festival, my husband and our neighbour were talking to someone there who had a display of birds of prey.  As they were chatting it emerged that they use them for rabbiting, and as we're snided out with rabbits, it was arranged for them to come and see if they could thin them out a bit.
They came last week but the rain was so bad, they didn't stop long.  It's a beautiful day today, so much nicer for the birds.  Here's one of them which is a Harris Hawk 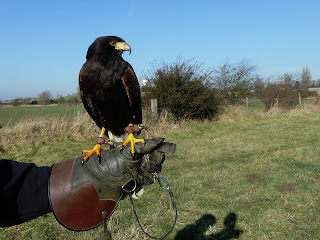 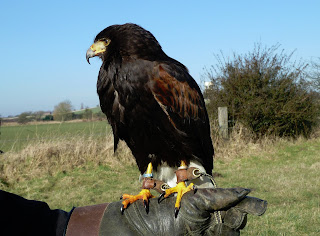 They have ferrets to flush the rabbits out but I don't know how they got on because I had to go out.


This is one of two identical blouses I got from the charity shop for £1 each.  Well identical in all but colour, the other one is in pinks (more about that another day).
I don't think they have ever been worn and as you can see it's quite big - I think it might even be maternity wear because it's supposed to be my size. 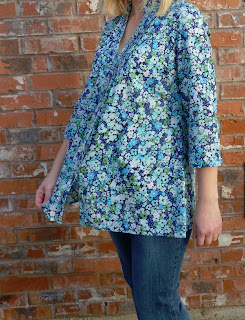 Most of the fullness comes from beneath rows of pin tucks at the top of the front.  This wasn't just where the pin tucks ended though, the pin tucks were a sort of bib and there was a separate piece of fabric gathered onto it.  This made it very easy to unpick the gathered bit, flatten it out and restitch it on, whilst also making a vertical seam  to accommodate the spare fabric.  It then only needed a couple of darts in the back.
I didn't like the three quarter length sleeves so I shortened them and also the bottom. 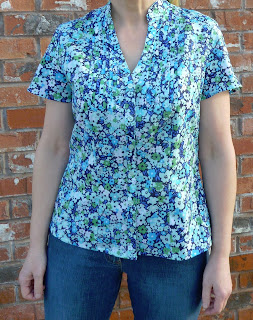 I toyed with the idea of taking a collar off a plain blue blouse I haven't worn for years and attaching it to this, but then decided against it.
Apart from the bit I cut off the bottom and the sleeves, I had some other bits and bobs left over.  There was a narrow tie belt and a couple of those tabs for when the sleeves were rolled up.  It was when I took the tabs off, that I had what I thought was a brilliant idea, and it concerned the aforementioned blue blouse.
Here is said blouse (the collar's turned up because I only remembered to take a photo after I'd started on it) 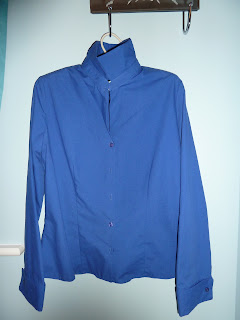 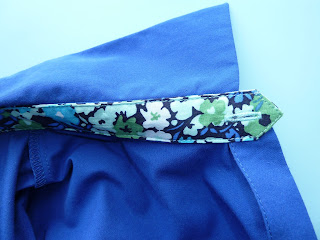 I didn't like the sleeves because the cuffs were fastened like they do with cufflinks, but using two buttons.  This made them stick out and it was hard to get a cardi over them.  So I shortened them and used the cuffs off the other blouse to finish them off like so 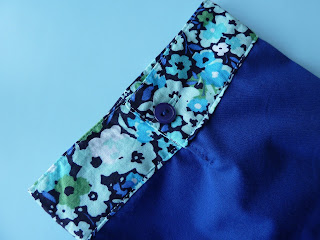 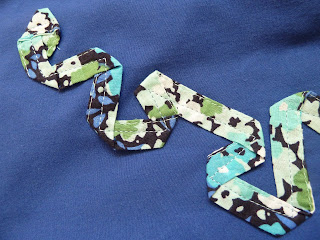 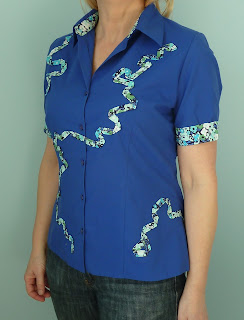 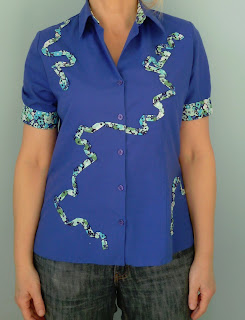 I was really pleased with it and the colour suits me, but when I showed my husband he said I looked like a nurse or I worked in a care home!

The thing is, now he's said it I can see where he's coming from.  I think it's the blue colour and maybe the cuffs, but surely not the swirly bits?

What do you think, does it look like I've just come home from a 10 hour shift on the ward?
If it does can you suggest anything to rectify it?  I've still got the sleeves left to play with.

Be honest, I don't mind if you agree with him!

Two into one will go

I like to bake every few days, especially now the hens have started laying again, to use up the eggs.  I usually make up a basic sandwich cake recipe which I bake as buns, dividing it into two to cater for the different tastes of my husband and son.  My son likes chocolate cake but my husband doesn't, so it's most often a tray of chocolate chip buns and a tray of sultana buns.
Anyway my main oven packed in last week and the top oven only has one shelf, so I've been making a cake instead (I have tried putting another shelf in from the bottom oven but things don't cook the same).  I've been making sandwich cakes, but today I thought I would experiment by making a cake with two different sides and it turned out all right.
One half was chocolate chip (I find the packets of choc chips expensive so I buy bars of Tesco value chocolate and chop a few rows up) 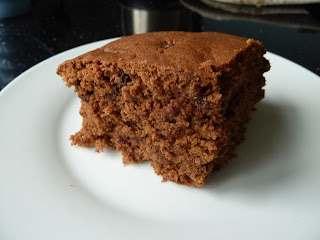 The other half was sultana 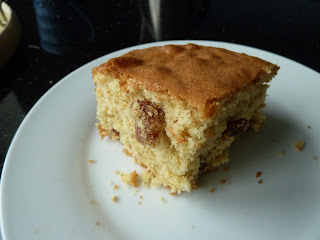 and this is what the whole cake looked like 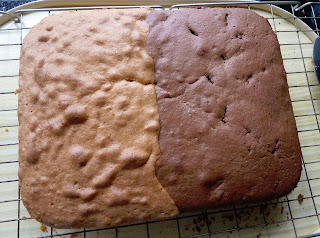 There's a bit of mingling in the middle but I'm prepared to eat that!

My daughter often gets free tickets to see films before they've come out on general release and tonight I've been with her to see Song for Marion starring Terence Stamp and Vanessa Redgrave.
Marion is in her local choir, and it had me smiling from the very beginning because it was just like the choirs I'm in.  Her husband is a miserable so and so and thinks the choir's a load of rubbish and reluctantly takes her to rehearsals because she's ill.
I won't tell you what happens but it's a bit of a tearjerker.  There are laughs too and I really enjoyed it.

Driving me up the wall

In my youth I knew someone who was a keen rock climber and one weekend he let me join him and his friends for a little taster session.   I can't remember exactly where we went but it was either in the Peak District or the North Yorkshire Moors.
Unfortunately I didn't get more that a few feet off the ground before I froze and couldn't move up or down!   They managed to get me down and I didn't try again.

In recent years I've started thinking I'd like to give it another go, just to see if I could get any further.
A few years ago some new kids' play equipment was installed on our local playing field.  One of the pieces was a like a wooden fort tower with various ways to get up to the platform, and a slide going off it.  One side was a climbing wall.
I was cycling past one day and thought I would check it out.   There was nobody about so I had a go on the climbing wall.  I got up it, although it took me a while.   I probably should point out that it's only about the same height as me!  Still I was pretty chuffed about it, went down the slide and had a couple more goes.  :)
While I was there I had a few goes on the new zip wire as well (it would have been rude not to).

Upping the ante, on Friday I went to The Foundry Climbing Centre in Sheffield with my daughter and son.  We had one of the instructors with us, and with it being mid week there weren't many other people there.
Here's my daughter on the first wall 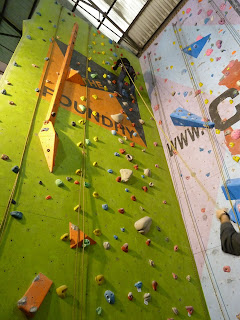 You'll probably have to enlarge it to see properly, but there's lots of different coloured holds/grips (I'm not sure what they're called), but you have to try and just use one colour to get up.  On this one we were using the red ones.  It was scary when I got to the top and looked down, and when I had to let go of the grips and hold onto the rope to be lowered down, it was very unnerving because holding the swaying rope didn't feel as safe as holding onto the wall.

Here's me on the next wall where we were using the yellow grips.  I was in this position for quite a while trying to reach the next hold, but eventually reached the top 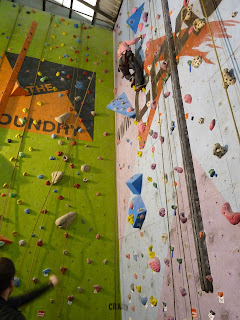 I didn't get any photos of my son in action because while one of us was climbing, another was attached to the other end of the rope, taking their weight, and the third feeding through the end of the rope, so to take a photo we had to ask the instructor to take over the end role.

On this next wall the grips were really difficult to reach as you got higher and my arms got so tired I couldn't make it to the top.  In fact none of us got to the top on this one (so I don't feel too bad) but here's my daughter making her way up 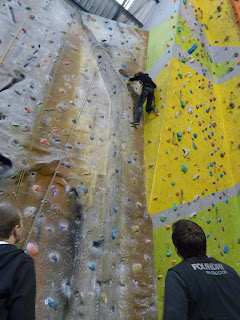 We also had a go at bouldering, which is without a rope and harness but with a crash mat underneath. It's a lower wall that bulges out at the top like a boulder.

Afterwards my arms felt so shaky and weak there was no way I would have been able to drive the car straight away, so we sat in the cafe with a hot chocolate until I recovered!

I've realised that I haven't got a lot of strength in my arms so I'm starting to do press ups now.  Not that I might be going rock climbing again; I can tick that off my (imaginary) list, I just think I need to!

I'm taking part in a new photo scavenger hunt run by Greenthumb at Made with love.
Here's my selection for January 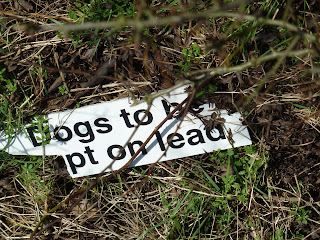 Cold
This is from a couple of winters ago, but I just love how our doorstep milk got frozen solid 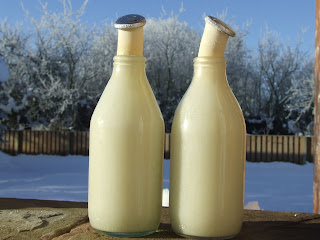 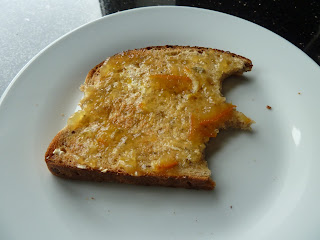 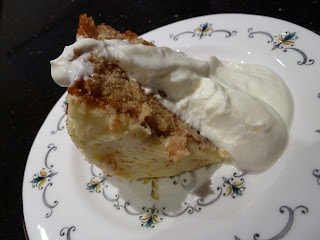 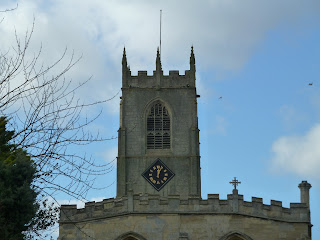 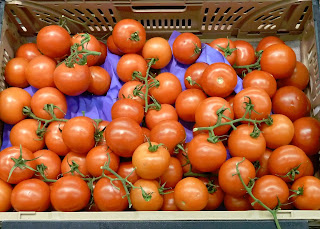 Blue
the sky against a white water tower 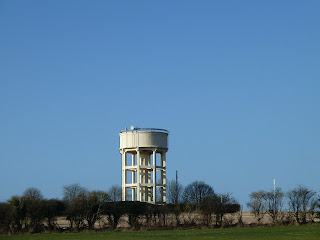 Door
When I saw this shed door full of signs, I thought there was plenty of choice here for the sign category, but in the end decided to use it as my door 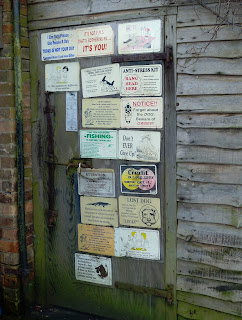 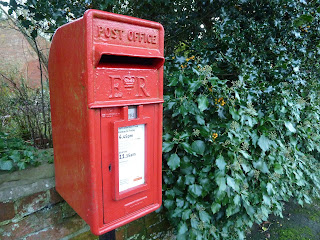 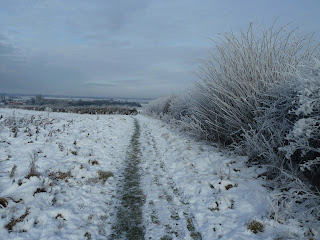 A statue
Well two together in Dewsbury 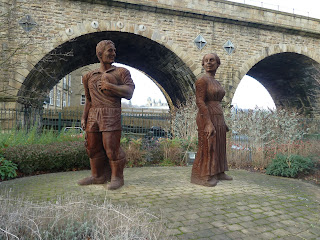 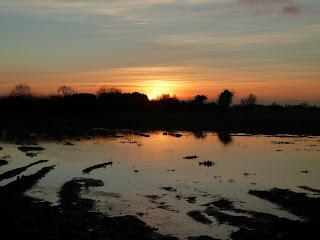