I know most of my readers live far away from here, but I just thought I would big up a local event which is happening this Saturday (and well worth travelling to!).
In the small market town of Epworth, North Lincolnshire there will be about 40 different groups performing in various outdoor venues all over the town from 10 in the morning through to 5 ish , with an indoor evening concert, plus day long folk sessions in two of the pubs.
It's all free and there will be more types of music than you can shake a stick at, including choirs, medieval music groups, hand bell ringers, jazz bands, folk groups, guitarists, brass bands, groups playing songs you can sing along to, and much more.
And should it rain there will be provision for it all to be under cover! 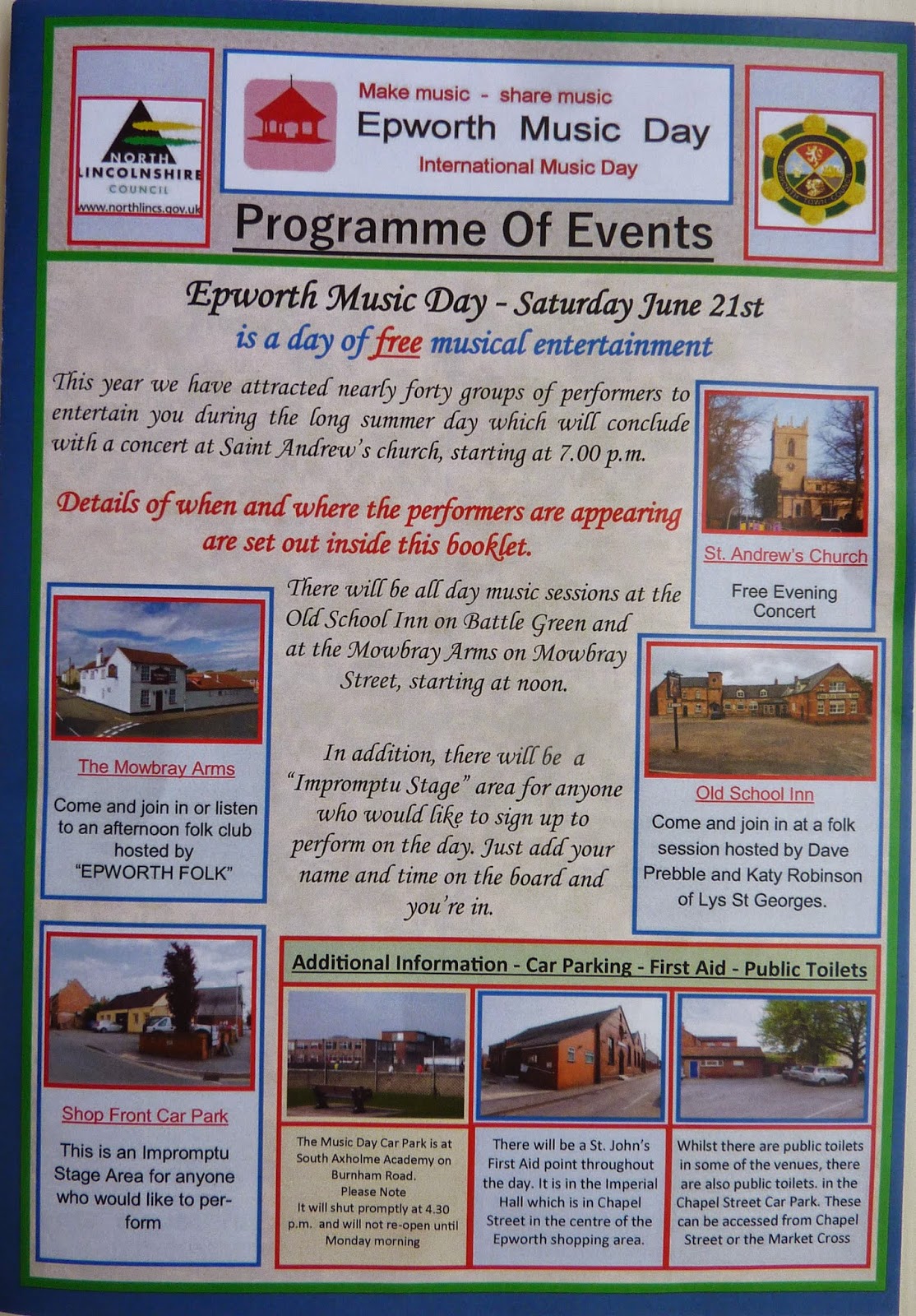 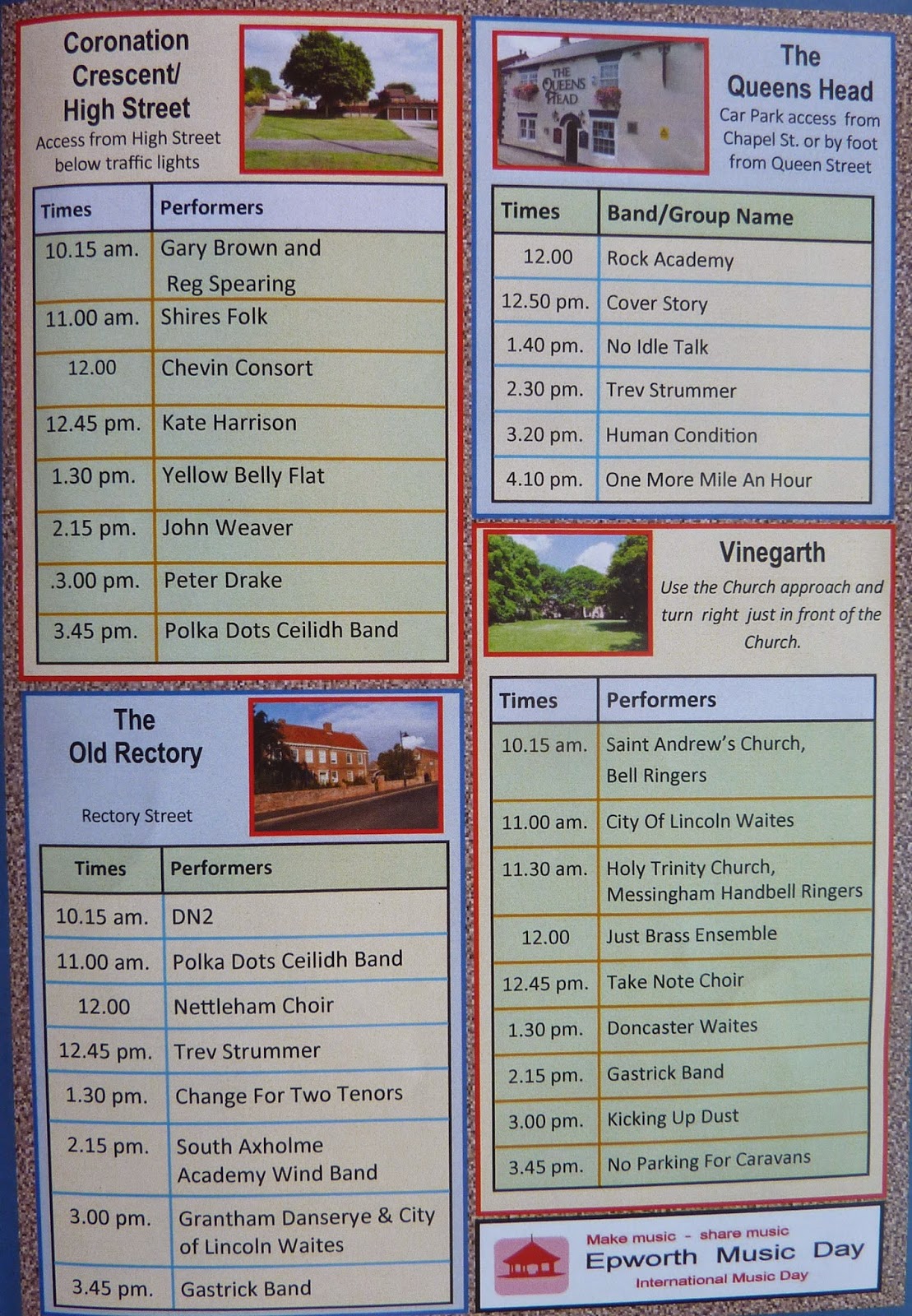 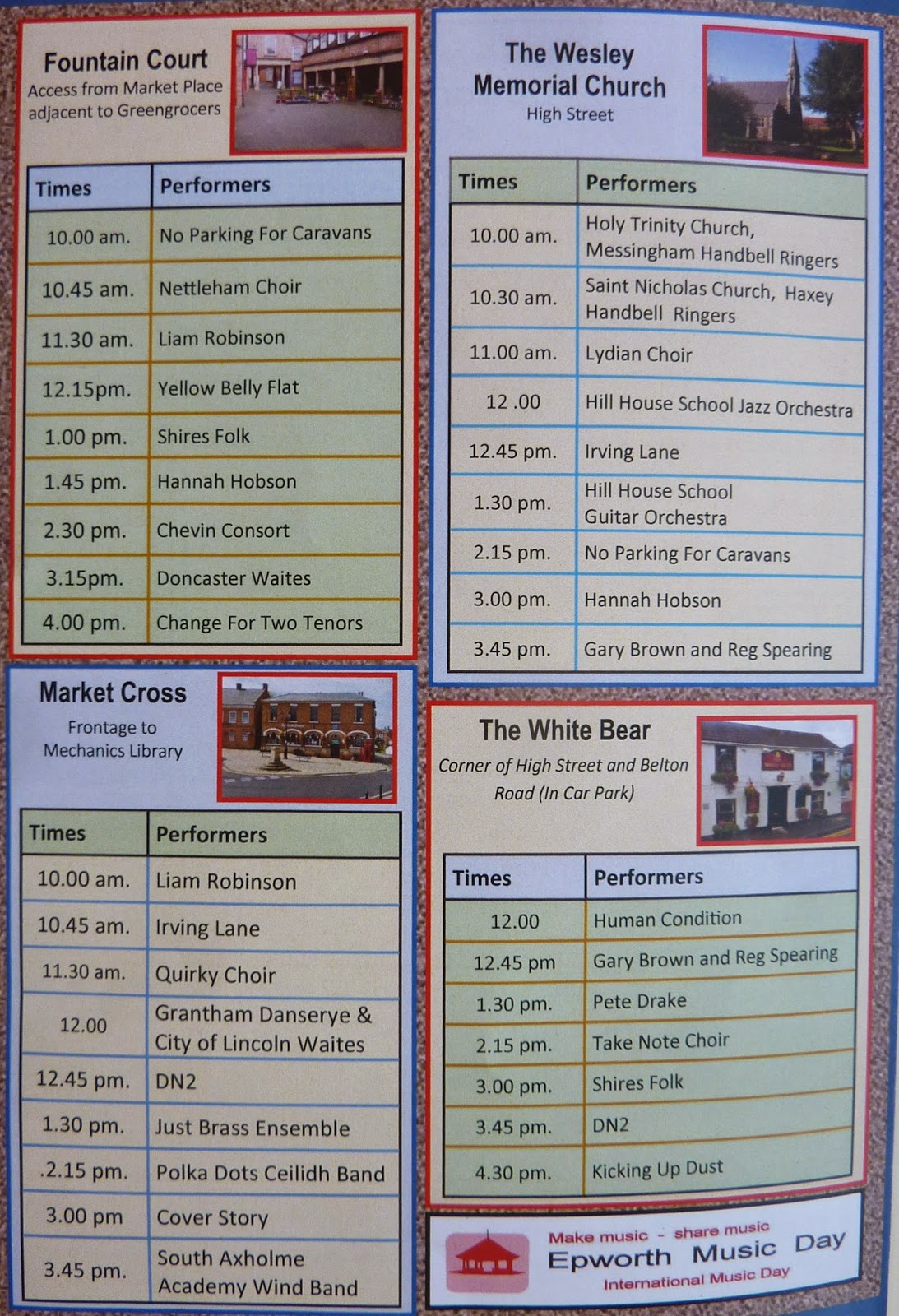 Oh, and did I mention that I will be singing?  Not on my own, in a choir.


I've just come back from a few days in Palma, Majorca.  It was quite unexpected; my daughter just phoned me up last week and said "Do you want to come away with me next week?".
She wanted it to be an active holiday and I don't do action in the heat, so, bless her, she found a lovely walk for us to do on one of the days which was mainly in the shade.
We hired bikes another day and cycled to El Arenal which was 28 miles altogether.   I don't think I've cycled more than 10 miles before but the bikes were sooo comfortable!  There is a cycle path along the coast with a breeze most of the time, so it was very nice.
Unfortunately I lost my camera while we were there, along with my holiday photos of course (I think I stupidly left it on a bench).  Luckily my daughter had taken a lot on her phone too, but 98% of them featured one or both of us, and I don't like putting recognisable photos of us on here so I haven't got much to show you.

This is one of the many signposts along the walk.  I was very impressed with them, they're a lot better than we have in England - even tells what length of time you've got left to walk 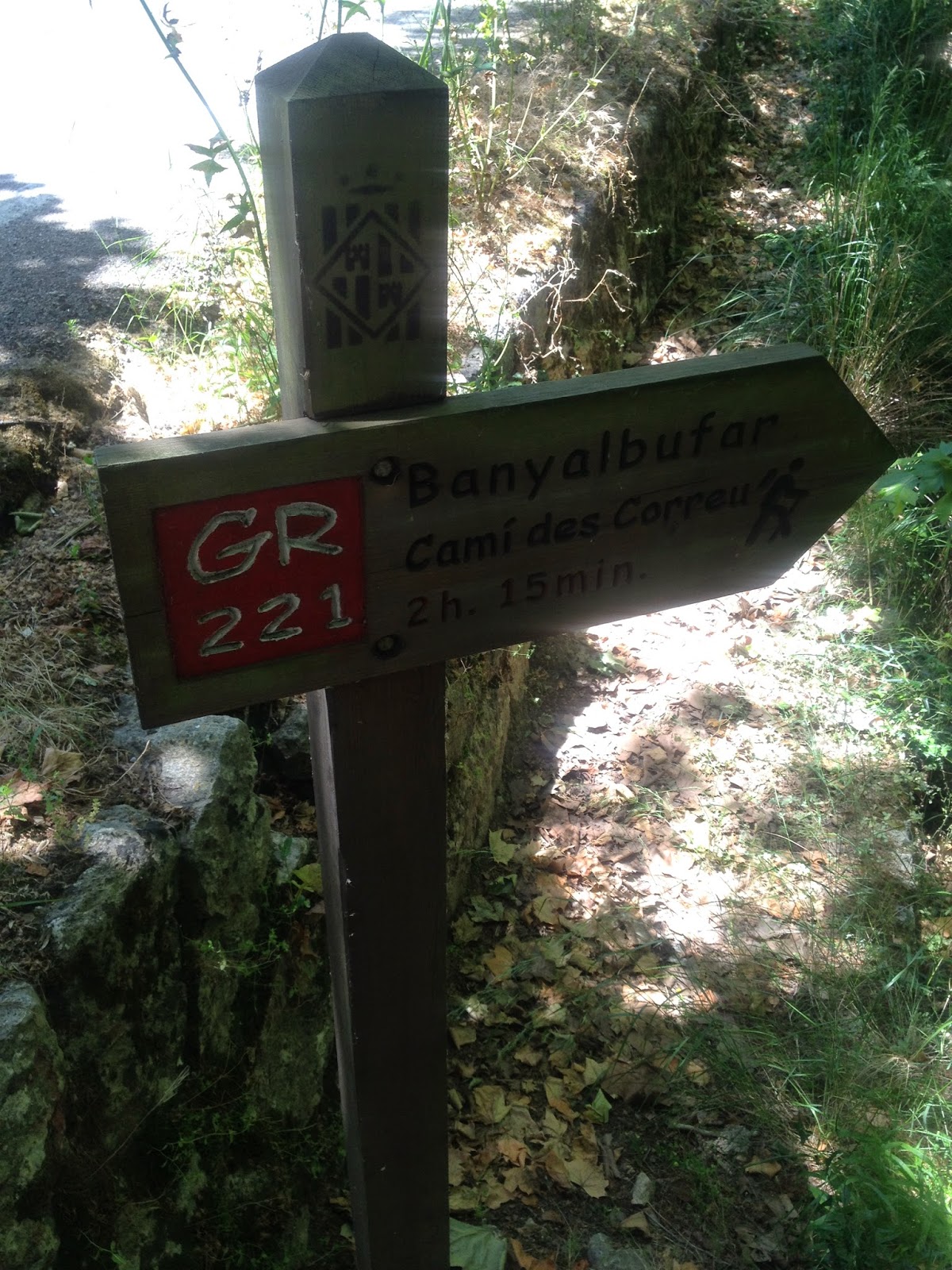 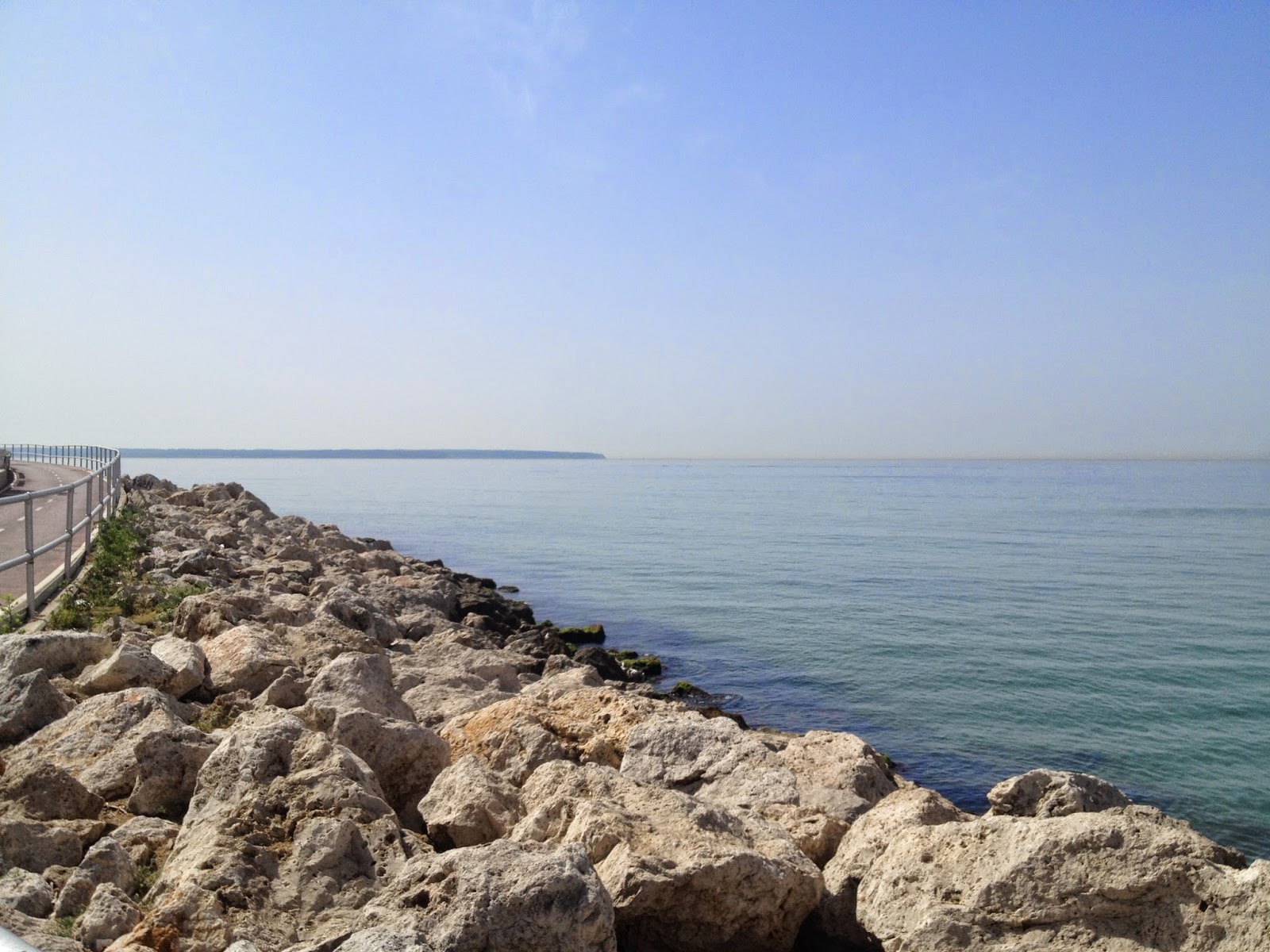 The harbour was just across the road from the hotel we stayed in. 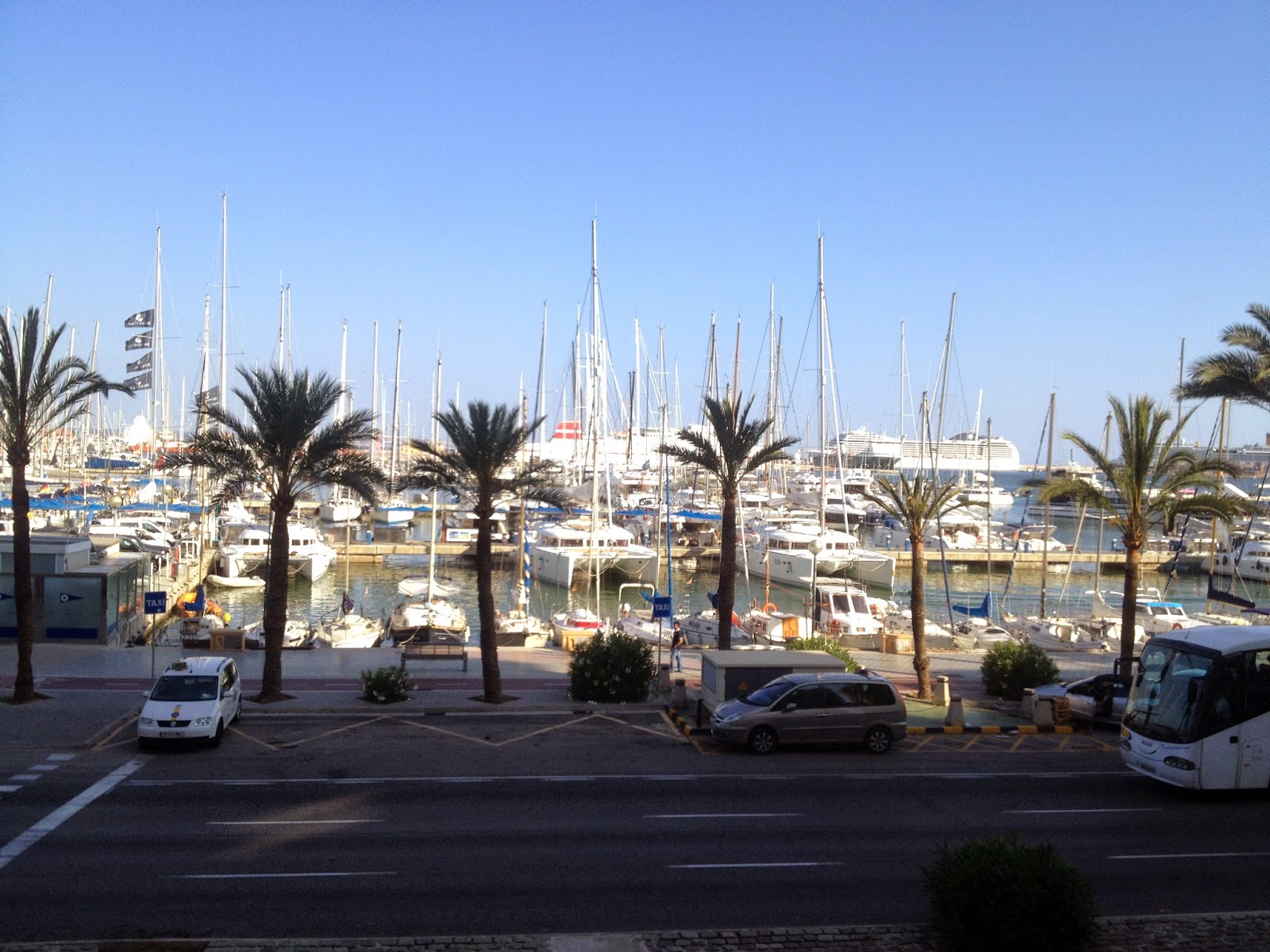 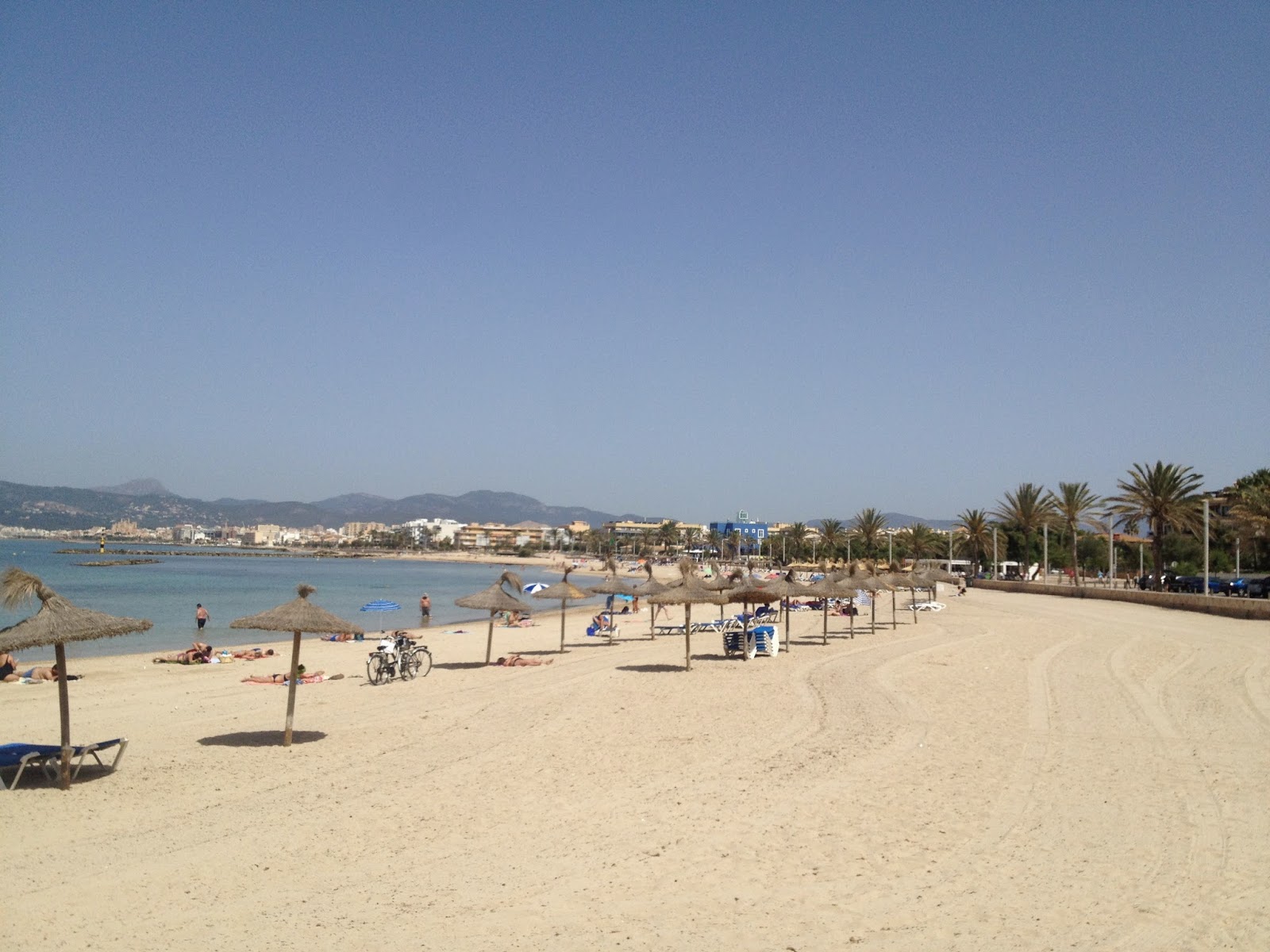 New kids on the block, and a spooky tale

I fell in love with some hens at a sale last week and bought two.  It wasn't until I got them home and compared them to the others, that I realised they're younger than I thought.   Which is why I haven't named them yet, just in case they're not both girls!
Here they are helping me with the weeding.  One's got more brown flecks on it's wings than the other 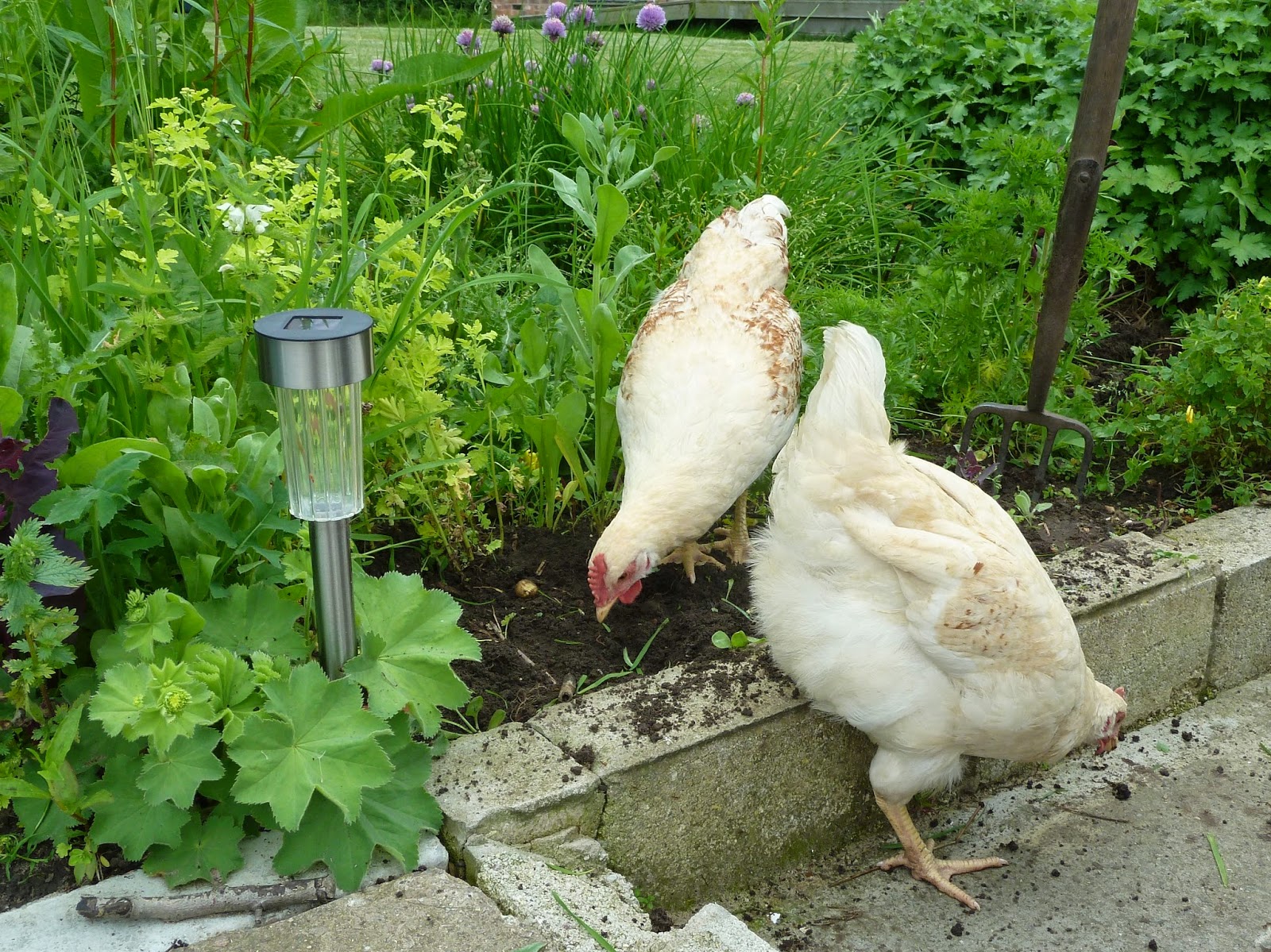 Bree doesn't let them get too near her yet 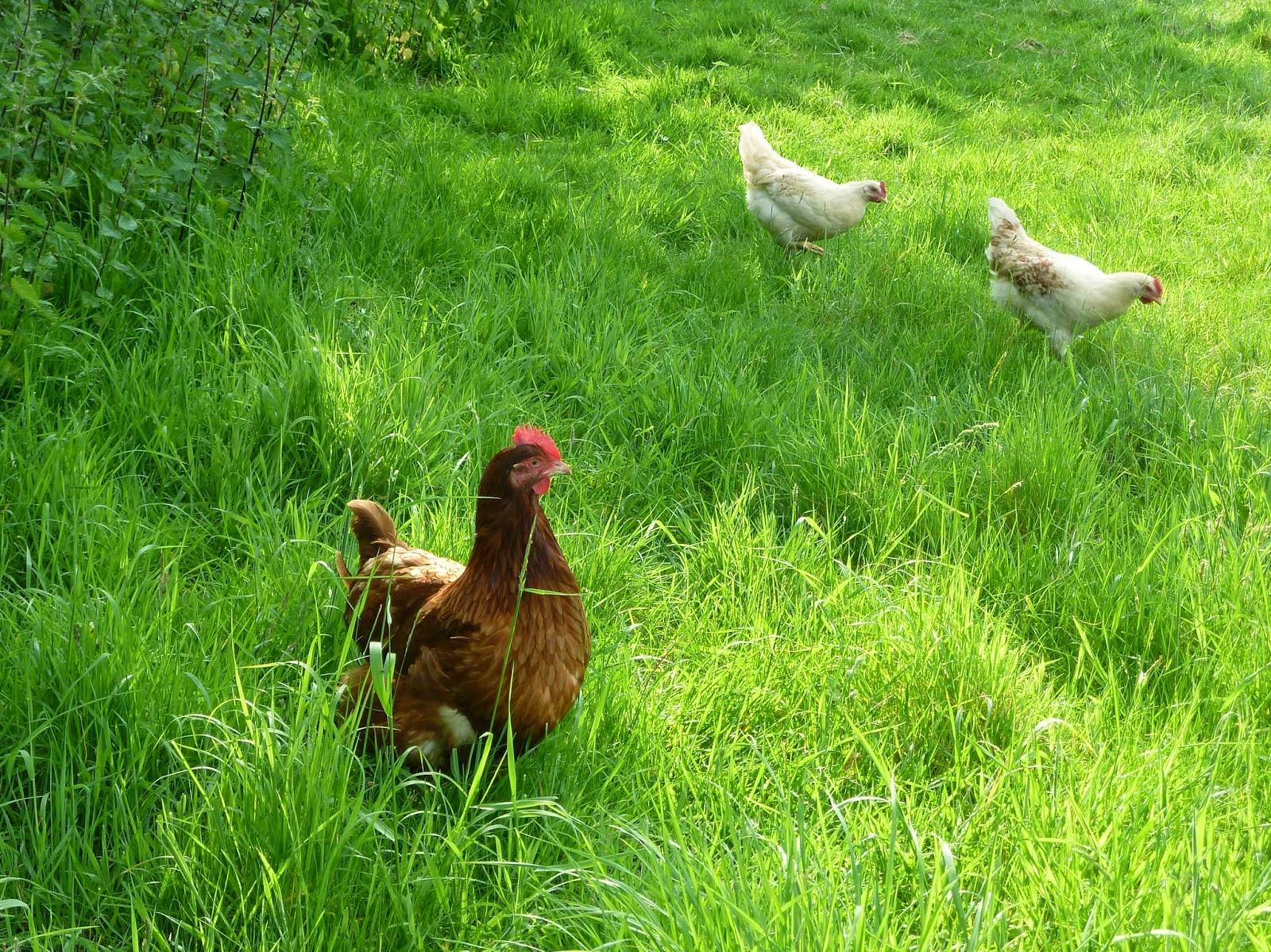 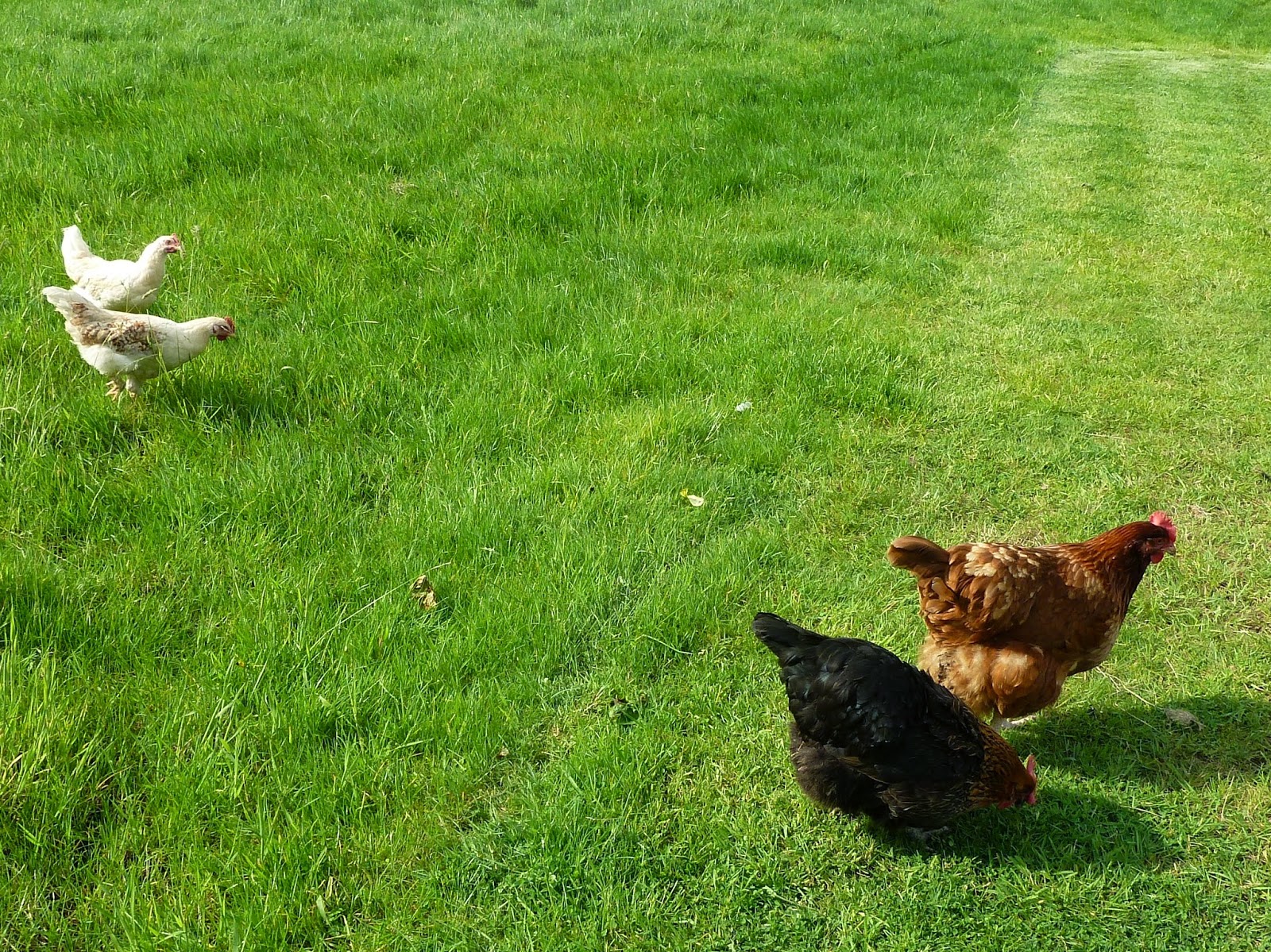 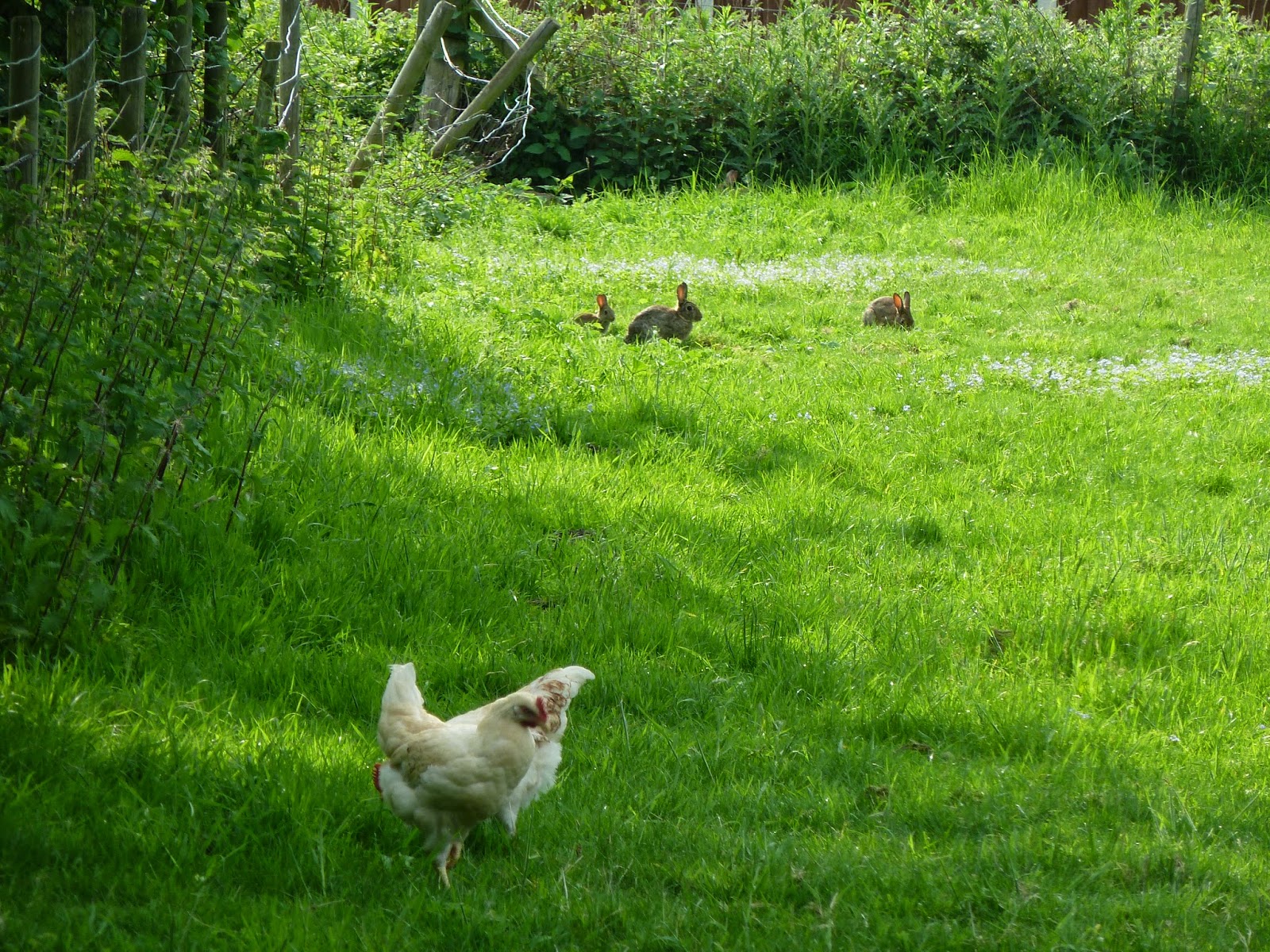 The other morning I opened the curtains to see one of those bunnys hoping to get a lift! 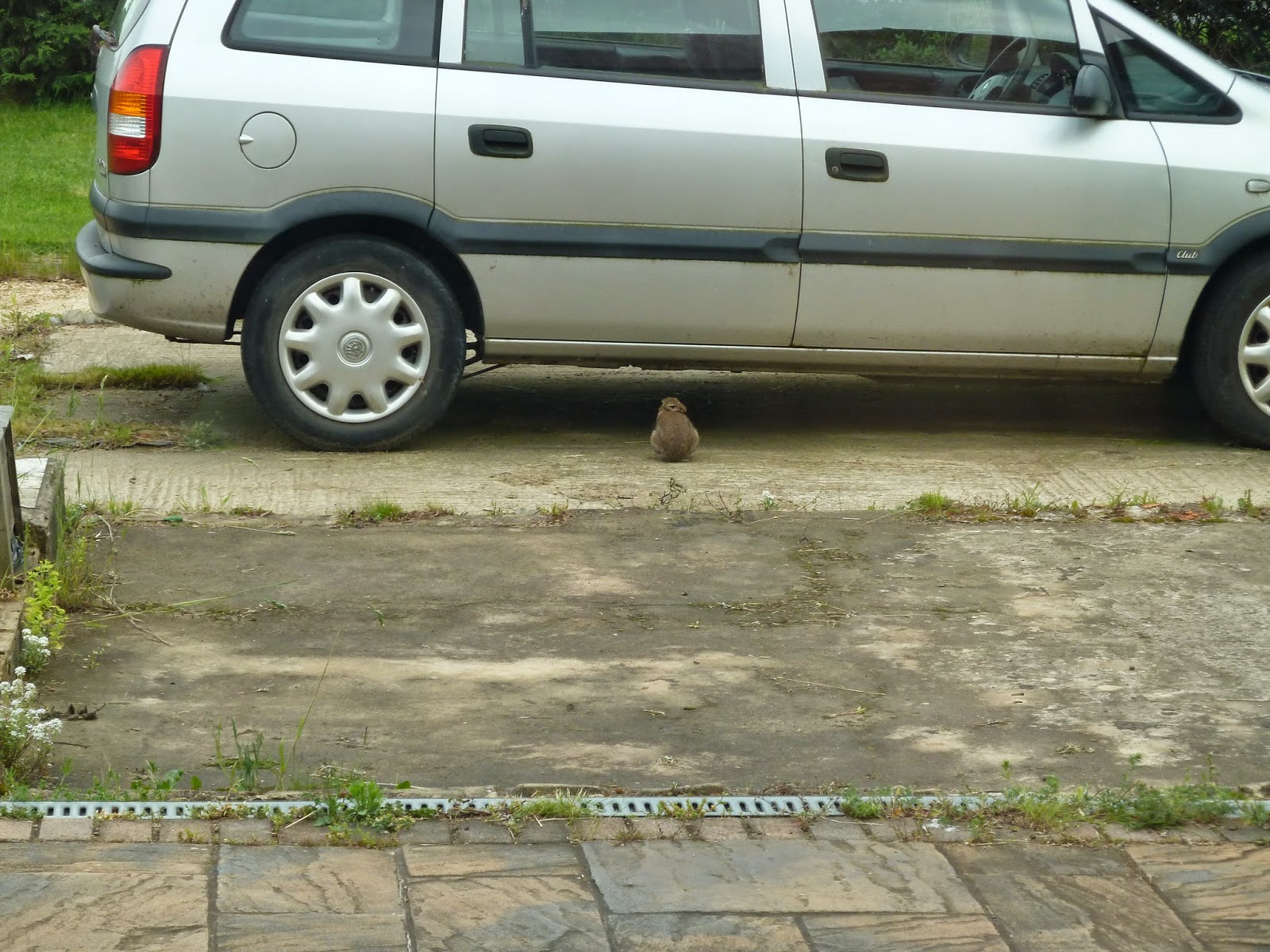 At the time when I wasn't able to blog, our cat Spaghetti died.  We buried her in our little woodland, but a few days later I saw her walking across the top of the field near the woodland.  Then I saw her again and shouted her, and she stopped and turned round, but then walked off.
Of course I don't really think it's Spaghetti or her ghost, but I'd never seen that cat round here before.
I saw it again the other day and took a photo through the window 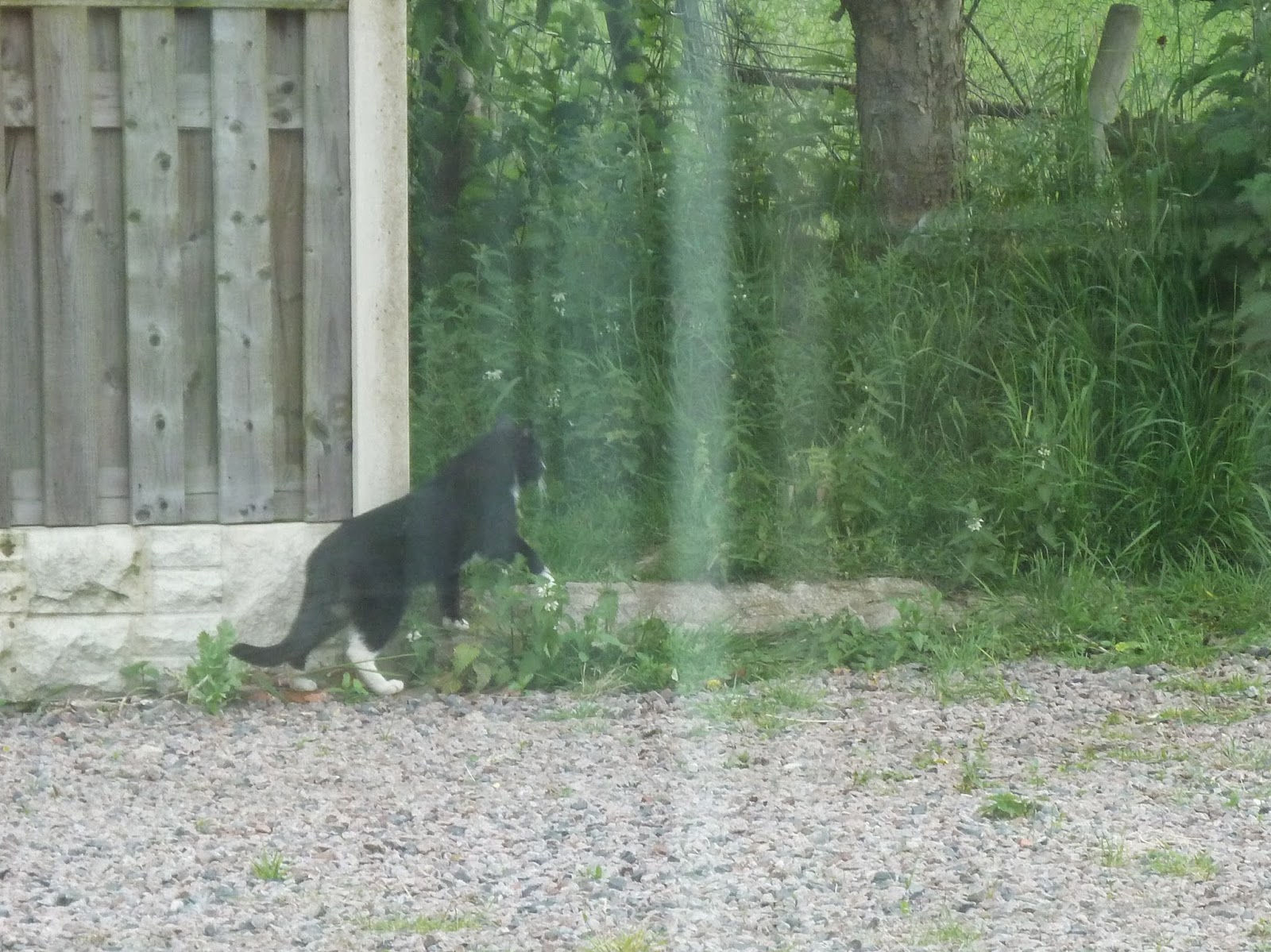 and here's one of Spaghetti 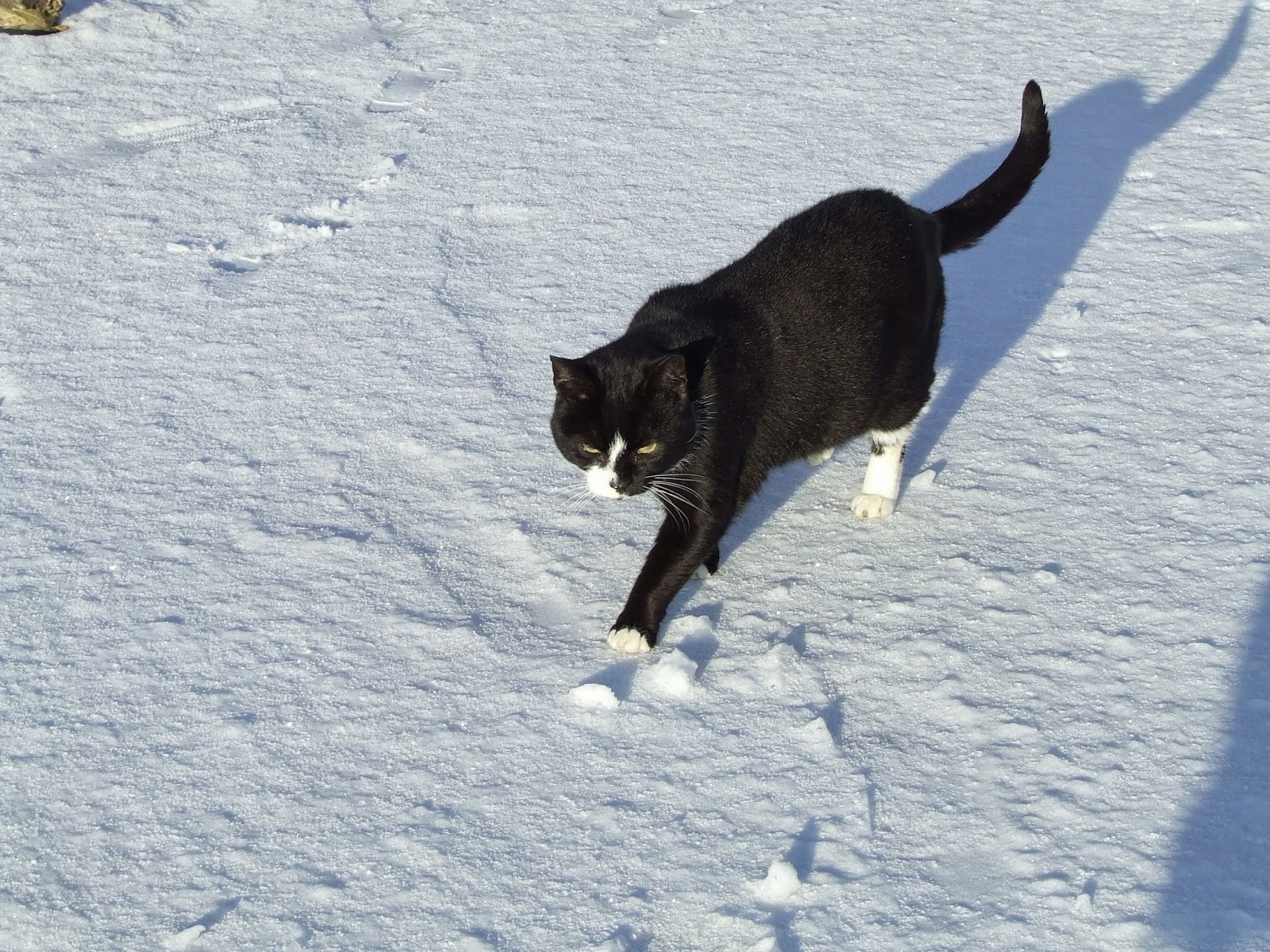 Is that spooky or what?