I've nearly cleared the back border now but in the far corner were a load of drainage pipes and flagstones which have been there years.  Today I managed to get my husband to help me move them but I think it'll take me a while to dig out the ivy, nettles and thistles that were growing there.  This job has been hampered slightly by the uncovering of a couple of toads.  I knew where one of them went but not the other and as they're the same colour as the soil and don't move I was scared I might stab one with the fork or rake it up... ugh! 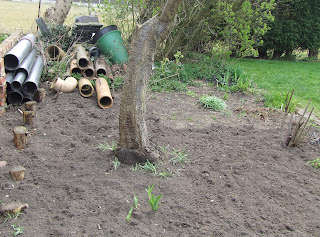 After all that hard work I used some of the nettles to make a nice cup of tea.  Isn't that a lovely colour? 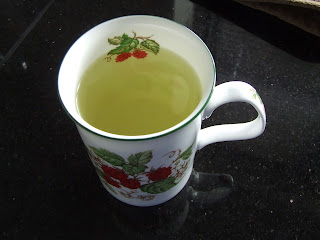 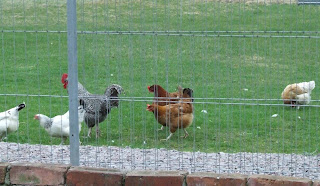 Start as I mean to go on

This year I'm going to try and keep on top of the gardening, because usually I do some weeding then rest on my laurels so to speak and some other weeds take over.  Like last year I thought I'd done well because I'd got all the dandelions out before they seeded but then some grass grew in the borders and I left it too late so it seeded all over the shop.
I've already weeded  the veg plot.  My structure for the runner beans is some security grids for windows that my husband got at an auction for next to nothing.


The photos aren't showing up but if you click on the white squares you should get them.

In the background you can see some tall fencing behind the wall that we've just put up to keep the hens in the field.  In front of that wall is a bed I've just started weeding.  I've done the bit closest to the camera on this next photo - it was chock a block with grass as you can see in the rest of it.  There's been quite a few casualties from the frost and snow we had in December but it'll give me chance to try something different.

These next photos are in front of the house.   This first area is pretty weed free as it's in the shade most of the day and the plants are tight knit.

This bit isn't bad either

These two photos are of the same bed and again there's loads of grass in here.

And finally in front of the house which I usually grow courgettes in as it's in full sun.

I'm hoping that now I've shown you the 'before' photos  it'll give me an incentive to tidy up!
I've been gardening at my MIL's this afternoon so I'll leave you with some lovely Spring flowers in her garden

They say simple things please simple minds.
Well I don't mind admitting that it amuses me greatly to say that lambs are gambolling.  I just love it because it 'sounds' as though they've sneaked away from their Mums to some secluded corner of the field with a pack of cards and their little stacks of money.
Ah, misspent youth...

Mind you this little gang look as though they could get up to some mischief!

The picture quality isn't very good I'm afraid because it was getting towards dusk.  I've been trying to take photos of them gambolling for days but they're usually just basking in the sun.  I was speaking to the farmer this morning and she told me that they have a mad half hour at around sunset so I've been back to get these.
I couldn't get the best one to upload but I'll try it again tomorrow.
Posted by Little Blue Mouse at 00:26 7 comments:

Who rules the roost?

Even though our cockerel Lotto, keeps the hens together and he's a lot bigger than any of them, he is a complete wuss when it comes to getting any treats thrown down for them. 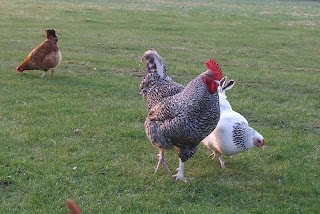 Nearly every time he bends down to pick up a tasty morsel a hen will run up and snatch it out from under his beak!  Luckily he's the only one who will eat out of my hand so he always gets something 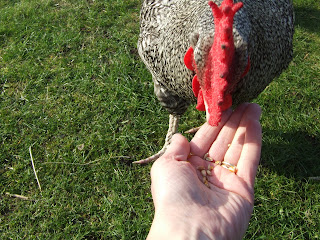 When I let the hens out yesterday one of them hurried off and disappeared behind a roofing sheet that was leaning against the hay shed wall.  I had a look later and found these - 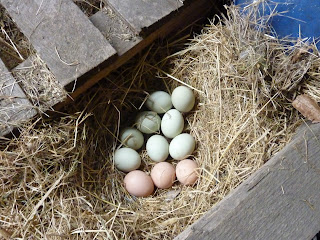 I tested for freshness by putting them in a bowl of water and as they all stayed on the bottom I decided to use some of them in a bit of baking.  I made a bread and butter pudding which I forgot to take a photo of before it had been eaten, and a cherry cake 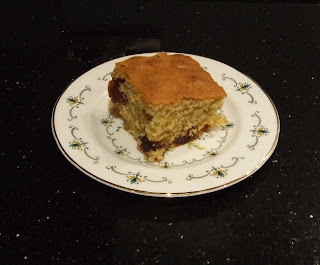 and speaking of eggs, today I collected a really big one compared to normal 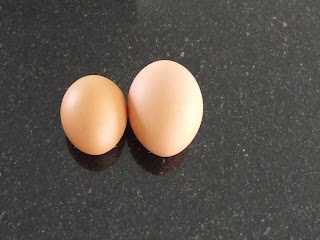 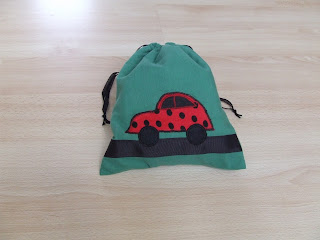 The car is made from a cardigan which I had in my head wouldn't unravel as it's only fine, hardly thicker than a t shirt.  Oh how wrong!  I had stuck it down first with some of that fusible stuff (which I got from freecycle) but the edges were still doing their own thing and and I wondered if I'd be able to stitch all the way round without mishap, but I managed it.
Posted by Little Blue Mouse at 18:28 6 comments:

Spring can't be far away now

I've been gardening at my MIL's on this first day of March and it's been lovely and sunny, I hope this is the start of better weather.  She's got quite a lot of flowers in bloom - 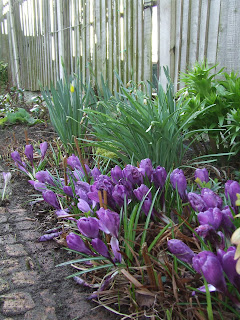 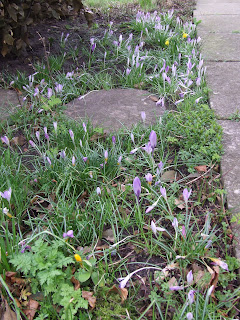 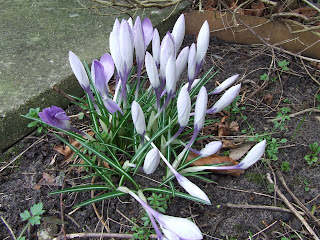 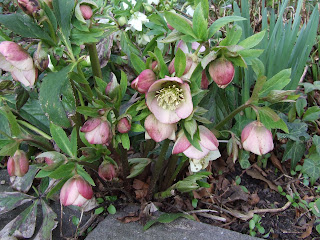 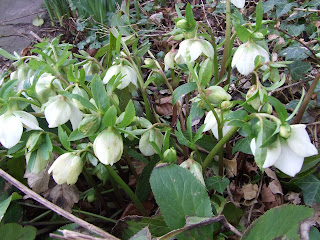 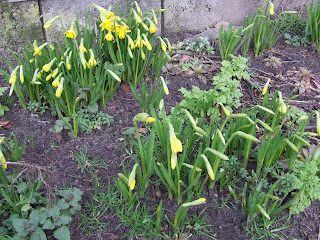 and an iris with some aconites 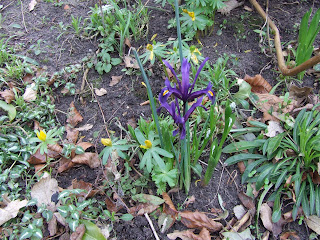 and back home in our little woodland, a patch of violets 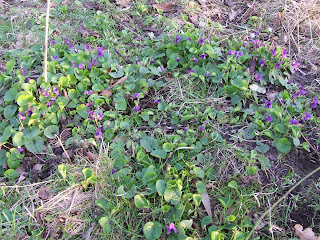 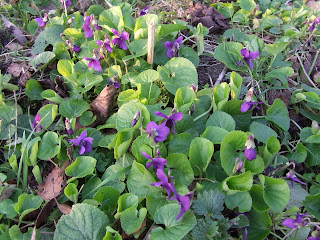 I'm sure it was only a couple of years ago that I transplanted a violet I found in the lawn and  it's really spread.  It can't be to the rabbits taste!
Posted by Little Blue Mouse at 17:19 5 comments: